Shop in other countries

You are shopping in USA Headquarters 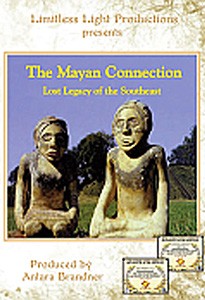 LOST LEGACY OF THE SOUTHEAST
A New Historic Perspective
DVD documentary hosted by Antara Brandner
History books record the life of the Mayans who built massive pyramids, waterways and cities and gave us mathematical ciphers of astronomy. This provocative documentary suggests, however, that the skillful boundaries of the Mayans also pushed deeply into North America where they led countless expeditions in trade and influenced the names of villages, sacred art, and even temple building. Social scientists, linguists and archaeologists, Dr. J.J. Hurtak, Dr. Desiree Hurtak, cultural historians Dr. Will Goins, Richard Thornton, and Mayan Elder Antonio Oxte provide persuasive insight of the times and images on the wider range of the Mayans who could be called the frontier people of a great civilization covering not only Central America but a large portion of what came to be the USA in North America!

The Teachings Our books, music, videos, and study programs cover a complete range of basic scriptural material which include the prophetic, the mystical, and the ancient wisdom traditions. The teachings are not put forth strictly in a historical sense, but cover many disciplines which include archaeology, linguistics, music, para-physics, and contemporary science. Please browse our catalog of books, music, and videos by using the navigation buttons, and then use our secure online shopping cart to place your orders. If you have any questions regarding an order, please call us.