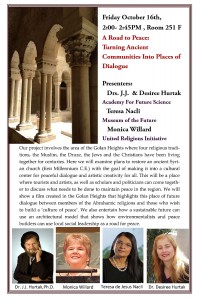 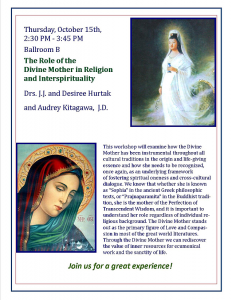 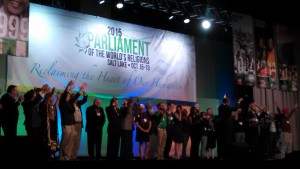 Hundreds of gifted speakers and almost 10,000 people from all over the world came together to place emphasis on the need for harmony, cooperation and love at a time when many challenging issues are being faced by the human race. The issues presented were on all levels of daily life ranging from environmental and ecological planning to the challenges of peaceful problem solving presented by the world’s diverse religious systems. Especially present were the large delegations of indigenous people also known as the ‘first nation people’, represented by delegates of the Kogi (Colombia, South America) and many of the major tribes of North America. Chief Orville Looking Horse was one of the eloquent spokespersons and Ta’Kaiya Blaney, one of the most powerful singers at the young age of fourteen.

Drs. J.J. and Desiree Hurtak along with international spiritual leader Audrey Kitagawa had the rare opportunity to speak on the importance of the Divine Mother and the Holy Spirit in our time on the basis of the Hurtaks’ new book, ‘The 72 Names of the Myriad Names of the Divine Mother.’ Audrey Kitagawa was the former Advisor to the Office of the Special Representative of the Secretary General for Children and Armed Conflict at the United Nations. She was also the former Trustee of the Council for the Parliament of the World’s Religions. From Kitagawa’s personal experience and the Hurtaks’ new book, the audience heard the power of the Divine Names from scripture and other sacred texts from around the world which revealed the Cosmic Christ, while providing a power to help change the world through compassion.

Along with the teachings on the Divine Mother, deeply beautiful Lakota chants were added by Darlene Sanchez of the Academy’s fellowship team in Arizona, and indigenous drumming was added in several programs by Michael Dodin from Pennsylvania. Drs. Hurtak and Audrey Kitagawa also had the opportunity to speak at the end of the program on the theme “Helping to Bring Peace to a War Torn Country” which covered Kitagawa’s experiences in Nepal and her work with a Vietnamese Buddhist monk. Drs. Hurtak added by sharing their stories on the survival of tribes in the Amazon Basin during this time of environmental genocide. The understanding was that peace comes first by consciousness and then education, and with this we can create a culture of peace.

An additional talk was presented by Drs. Hurtak, Monica Willard and Teresa Nacli on the project that many have become involved with — restoring an ancient Church in the Golan. Members of the Academy had the opportunity to break bread with a score of leaders, including Karenna Gore (ethics and ecology, daughter of Al Gore), Grandmother Flor de Mayo (one of the 13 Indigenous Grandmothers), and many other new friends. Antara Brandner was able to film many of the events and will be presenting them at upcoming Academy conferences. All were conscious of the need to apply the “gifts” here and now in working on the themes of new ecology and Spirit-centered theology for peace-building and for reaching out through spiritual networking.

Thinkers on religion, environment, consciousness and workers for peace were unified to bring an understanding of the importance of our work on planet earth right now! We also would add the need to understand the greater cosmic cultures of the universe as discussed by the great mystics who had a higher experience. The coming together of West and East, North and South on a higher level of the spiritual-scientific is now leaving the “comfort zone” and seeing the next chapter of life!

For pictures of the event go to: previous events