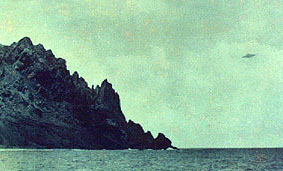 Picture taken aboard a Brazilian Naval ship in 1958 by Almiro Barauna, a professional photographer.

The May, 2005, announcement by the Brazilian government in Brasilia, and consequently by the Brazilian Air Force, to officially open their files regarding Extraterrestrial sightings throughout the country is a major planetary breakthrough!  Their files go back to 1954 and reveal that unique aerial sightings were labeled “H Traffic”.  The release came after pressure from a team of Brazilian experts who insisted on public access to this information.  Among these individuals was A.J. Gevaerd who is familiar with The Academy’s work and information.

This release of documentation is a major step towards global recognition of the reality of the existence of Extraterrestrials.  Further confirmations of ET life would carry profound consequences including reassessments of astronomy, cosmology, and theology.  The ‘mystery of the missing link’ would finally be placed within a new perspective.

Among the documents released was the May 1986 sighting of 21 objects, some over 300 feet in diameter, detected on Brazilian air traffic radar over Rio de Janeiro, Sao Jose dos Campos and Sao Paulo, whose presence and activity scrambled jet traffic in these areas.

During a visit to Brazil at that time I was permitted to analyze some of the confidential photographs of this sighting, and I can affirm that the event was real.

The presence of observed and documented extraterrestrial technology and space movements should reveal a superior intelligence operating in our local space.  It should also reveal that these visits are from a wide variety of visiting extraterrestrial races.  If they are clearly more advanced, could such superiority be partly due to genetic engineering which created a more functional brain capacity or orders of higher genetic selection?  It may also be due to the fact that ET life may have existed in environments that have not been devastated by cataclysms, such as floods and meteorite impacts, allowing tens of thousands if not millions of years of ongoing evolution.

A confirmation of ET reality would also mean that no complete explanation of the origin of life could be found on our planet alone and that we therefore must press onward with findings in the larger planetary and galactic design of intelligent life.  The spiritual dimensions of life, I believe, have been slow to awaken on planet Earth, for they require, in order to become explicit, that our consciousness rise above the ever-expanding circles of family, country and race to finally discover our divine destiny within cosmic cultures.

Why the secrecy on the part of Extraterrestrials? Perhaps they realize that we are just now taking our ‘baby steps’ and are observing us as we awaken into a vast and awesome universe. Other documents suggest a non-benign form of intelligence interested only in their own mineralogical mining and/or private testing of various forms of species’ life, even at the expense of our own free will.

In the end, the release of documents covering more than 50 years of occurrences in one of the largest countries of the world is highly significant at this time of a ‘near clash’ of civilizations.  Perhaps this will encourage us to practice the cosmic law of love and respect for biodiversity, reflected in the spirit of our mother Earth. Humankind needs genuine leaders and thinkers who will help digest and explain the next phase of operating objectives in the evolutionary design of life, bringing greater acknowledgment to the higher organizational plan of the universe.

May Brazil, a country in the ‘shape of the human heart’, be blessed for its courageous leadership.  May it be a witness to the high principles of discernment, sharing with her sister countries a greater way to resolve the state of the world.  May the world begin to realize the importance of alternative planetary references as we grow in consciousness and gain the moral awareness needed to carry us to the next level of engagement and the awareness of ‘The House of Many Mansions’.

Let us understand this as the first step to beginning a new emerging operational reality which connects with new and exciting levels of the Supreme Source.  This will not be a denial of “God” or the “Godhead” but an expanded updating of our basic criteria of historic assumptions in both science and religion with new versions of the supreme Word/Consciousness. May we on Earth sense our common origins and our higher destiny that draws us ever further forward into a positive understanding of the greater design of life in the universe through what will be known as the “Higher Evolution”.

We appreciate your interest. The Academy is a nonprofit organization. Please consider making a donation through our secure web server or by postal mail. We are always happy to receive extra contributions because they help us maintain our work around the globe. Your support is absolutely necessary to continue to make this possible.
You can always help — you can always pray.