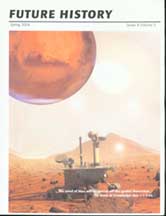 Following a ballistic entry, parachute deceleration and a large number of airbags being deployed which protected the sensitive onboard equipment, the “twin” NASA rovers made a 480 million  kilometer hole in one landing on MARS!  After deploying their solar arrays and other scientific instruments, the rovers took numerous panoramic images of the landing sites and began their  preliminary 90 day plus mission trek over the Martian surface, performing onsite scientific investigations every where  they went. The rovers have already investigated the promising geological locations where they landed, i.e., the Gusev  Crater and Meridiani Planum. One of the main reasons for landing in Meridiani Planum was to look for hematite, an iron oxide mineral that usually forms in the presence of water.

Before the eyes of the world, we were once again able to see panoramic camera shots of Mars. But this time scientists were well equipped to identify rock and soil targets and then command the vehicles to traverse bedrock and search out suspected water locations, creating a vast amount of information regarding Mars on a daily basis, and showing that the planet is still the most similar to our own in the solar system.

The realities of futuristic robots, equipped with basic logic programs, capable of conducting complex scientific explorations at ever greater distances from Earth are secondary to finding something more important: evidence that Earth and Mars shared the same biosphere of water, maybe even salt water!  After the first problems with the  landing gear and complex “Flash” command signals with “Spirit” (the first rover which landed), the “Opportunity” rover proved to the world that Mars was once very soggy and wet-having an environment that may have supported life. Even more exciting is this is just the beginning.  Scientists are becoming more psychologically prepared to accept  the fact that life may have once lived upon the red planet.  The missions will continue to carry out high_level monitoring and explorations, formulating and executing complex mission plans, but the initial objective of finding evidence of past water is done, the new objective awaits: finding the fingerprint of life.

Investigations into biological mechanisms of self-organization and other evolutionary processes are leading to possible models made by new computing paradigms of self-designing hardware and software.  All this is providing  insight into the origins and evolution of life and the possible  evolution of our universe. The opening of  the magnificent  picture of Mars begins with the actual landing on the anniversary of the blueprint of The Keys-January 3rd-now  coming into interplanetary fulfillment as revealed. The House of Many Mansions stands before our eyes awaiting our exploration and citizenship.

When ordering from the Periodicals area of the online catalog, please add the date of the issue you are ordering (e.g., Spring 2012). Write that into the end of purchase comment area to ensure you receive the issue you want.